Sunday, December 28, 2008
December 10 – Steve Irwin’s Australia Zoo
One of the reasons the Blog has fallen a bit behind is the fact that I needed to keep the account of our trip to the Australia Zoo close to our chest until Christmas. That's because we had SUCH a special time, it became a story for our grandson Kai. 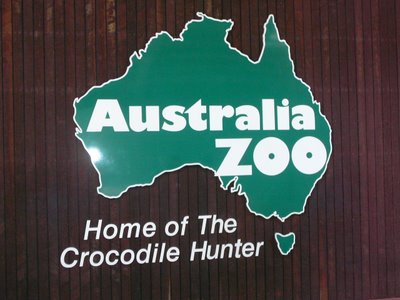 The Australia Zoo (http://www.australiazoo.com.au) is the life work of Steve Irwin, famous to the world as the Crocodile Hunter, and his family. Located nearby in Landsborough, the zoo was originally started in the 70s by Steve's parents as a reptile farm. The spotlight brightened on the zoo as word spread of Steve's antics with crocodiles. The zoo with its unique style and zeal is now carried on by Steve's wife Terri, daughter Bindi and young son Robert, as well as a whole crew of enthusiastic animal handlers. A visit to the zoo has been high on our Australia To Do list.

The plan was to rendezvous with cruising friends from the Scarborough area on Wednesday. The two of us took the bus from Mooloolaba (there is a special free zoo bus that you can make reservations for at the zoo store on the Esplanade!) and beat the other couples coming by rental car. 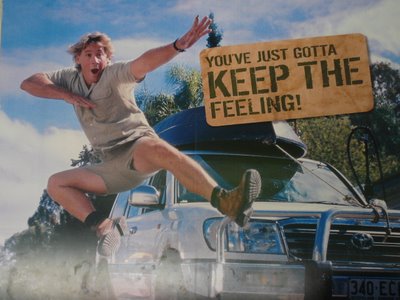 At the entry is a huge poster of Steve Irwin in mid-leap. It was the first indication that the Crocodile Hunter continues to defy death at the Australia Zoo! Everywhere you go, there are monitors displaying old segments of his animal encounters. If you didn't know, you wouldn't.

The grounds are very nice, with animals getting plenty of relatively natural space, but what really makes this zoo special is the cadre of uniformed ranger/animal handlers. Pretty much every critter has someone paying particular attention to it. Many of the animals, from cockatoos to alligators, are taken out of their enclosures and walked around the grounds on leashes, giving visitors the chance to get up close and even touch!

Mid morning we went to the show in the "Crocoseum", a sort of stadium with a shallow and very clear pool in the center of the fenced in lawn. The pool is connected to "off stage" with a long narrow "stream". There must be a "Steve Irwin" pill that the staff takes before each show because they come in fully charged with his very recognizable brand of enthusiasm. In our opinion the beginning of the show was a little over done, especially when a couple of costumed characters paraded through. I'm pretty sure we all thought about bolting out of there about that point. Thank goodness we didn't.

For us the showed turned super special with the "Free Flight Bird Show." A guy came in with a pet carrier with what appeared to be doves. He was alleged to be "training" them, but when he opened the door, the birds simply flew away. At that point the audience was enlisted to call the birds back. On cue, the sky began to fill with birds, but instead of the three doves, the incoming flyers were scarlet macaws, blue parrots, hawks and, well all manner of birds we couldn't identity. The birds flew multiple laps around the stadium before targeting their handlers who were stationed throughout. It was quite a thrill to see these fliers with enough space to actually fly. Indeed the final arrival was the pterodactyl-like Black-Necked Stork (known in Australia as a Jabiru) Djagarna. Djagarna (most of the animals at the Australia Zoo have names) who worked hard to climb high enough to get over a row of trees outside the Crocoseum. Then, her laps around and landing on the lawn seemed…precarious. Her performance was a surefire crowd pleaser, but we note, she walked off at the end! That flying stuff is a lot of work!

After the birds came the snake show. The snakes couldn't quite command the oohs and aaahs that the bird acrobatics did since most of them never left their handlers' arms, but it was quite impressive that the thrust of the narrative about them was that Australians can easily live in harmony with all the snakes that share their continent. The big boa constrictor, however, was allowed to swim offstage down the stream. 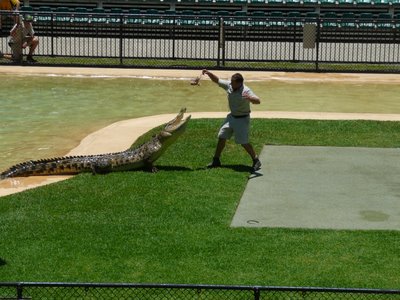 Which made a nice segue for the crocodile that shortly after swam in. While describing the habitat and range of Australia's crocs (they are known as "salties" but they can just as easily be found in fresh water!), the thrust again was of how to live in harmony. The "show" was a demonstration of just what crocs can and can't do. They CAN lunge fairly high out of the water to snap up food, but, because of their weight, they CAN'T move very fast on land leading to the recommendation of staying about 4 meters from water's edge when the presence of crocodiles is possible. This show, of course, is what made Steve Irwin famous. One wonders just how many crocodile hunter clones trying to live up to his reputation the zoo is able to keep on staff!

After the Croseum show, we separated to wander around the rest of the zoo. We had an ulterior agenda. 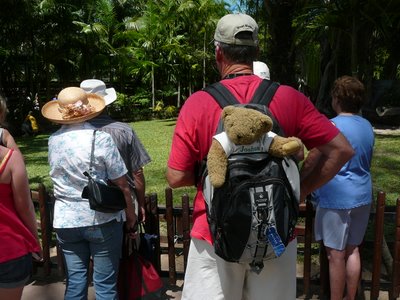 We had brought along in Don's knapsack our grandson Kai's Teddy Bear Joshua who has been traveling with us aboard Tackless II these past four years. In April when Joshua left with us from the Tampa Airport, for the first time Kai noticed. Early in the season, messages from Kai mostly went: "I love you, I miss you, and I want my bear back." In return, Joshua took to sending Kai emails about some of our adventures. We all thought the Australia Zoo would make a good story, and we had ideas of sneaking a few photos of Joshua with animals in the background. 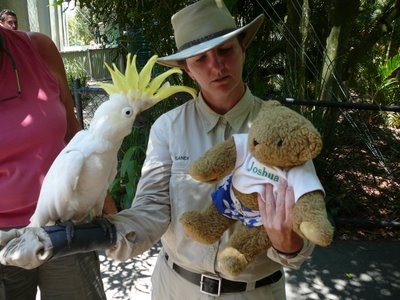 Well, enter Sandi, one of the zoo's animal handlers. We bumped into her as she was strolling the paths with a cockatoo. Both Sandi and the cockatoo were interested in Joshua's story, so moments later they were urging us to go down and meet an alligator that was being walking in a fenced field. To our amazement, they meant go INTO the field! We got several shots of the three of us with the gator, all keeping prudently to the non-biting end. 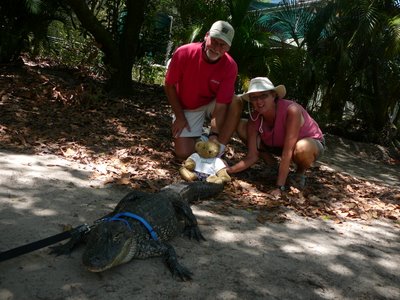 Joshua says the gator felt like plastic! Believe me, the gator wasn't, but thank goodness our close encounter with a crocodile was! 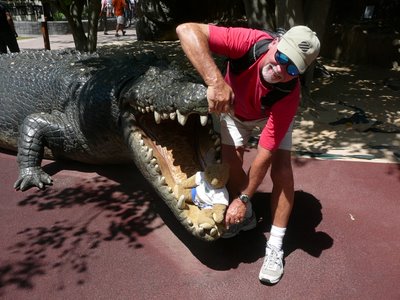 You might think that our friends were liable to consider us daft. And if not our friends, then the zoo staff. And if not the staff, then the other zoo-goers. To the contrary, everybody seemed to treat Joshua like a star, and our friends concluded it was a fine thing to be part of his entourage. Over the course of the rest of the day, Joshua met dingoes, kangaroos, a wombat, and an emu. 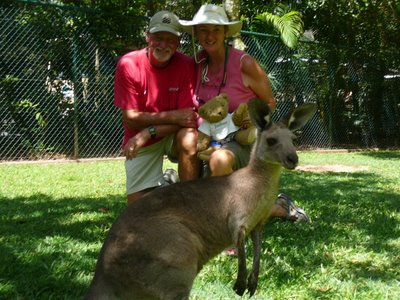 We also saw the elephants and tigers in the Southeast Asian section of the zoo, and read about the new African section set to open in 2009. 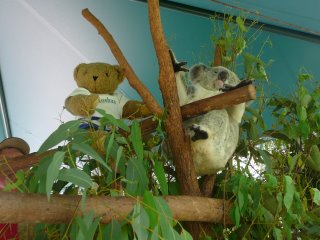 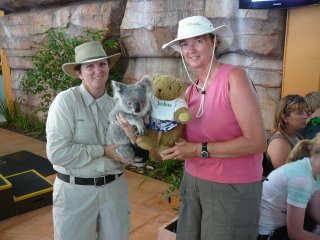 But, perhaps predictably, Joshua's favorites were definitely the koala bears. He got quite the kick of hanging out with the koalas in their zoo trees, and thanks again to Sandi, Joshua had a special introduction to Ellen, (a koala named for Ellen De Generis…whom I must admit she rather resembles!) I wasn't privy to their conversation, but apparently Joshua mentioned something about being homesick for his buddy Kai, because Ellen suggested that her nephew Andy, a koala with unusually active interest in his surroundings, take over looking after us in Australia.

Which is how we came home with two bears instead of one! 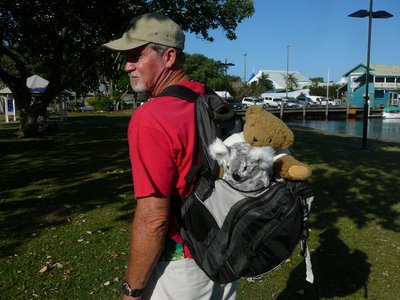 And how Joshua came to be the one member of Tackless II to fly home in time for Christmas. 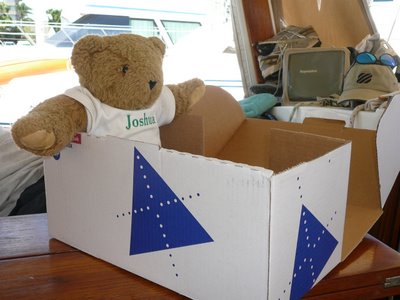 Anonymous said...
Joshua is a very brave fellow - also very trusting - I shudder to think what would have happened if Don's hands had slipped off the Croc's jaws - ooops - goodbye Joshua.
Happy New Year 2C's - see you in the spring.
Bill
s/v Geodesic2
January 1, 2009 at 1:46 AM