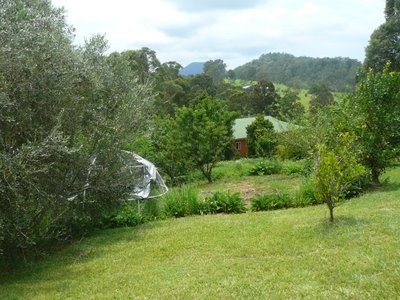 It was pretty special that our friends Jim and Paula threw a big party for our anniversary at their house in the Sunshine Coast hinterland near Cooroy. Well, okay, the party wasn't exactly for our anniversary. It was actually in celebration of Paula's 40th birthday, but it was scheduled a week early because the Hollands had new tenants moving into the house the following week and they themselves were taking off for Scotland for two months. However, thanks to the rescheduling, the party ended up taking place on our anniversary, and we could haven't conceived a nicer spread of food or gathering of people…even considering we didn't know any of them!

Jim and Paula, of course, have been out cruising most of the past year aboard their boat Avior. They took off at the beginning of the last cruising season with a rally from Australia to Vanuatu, spent four months there followed by the same 6-7 weeks in New Caledonia that we did, which, of course is where we got to know them. It might seem a relatively short acquaintance to landlubbers, but Jim and Paula have gone out of their way to extend these two Yanks an exceptional hospitality in their home country.

They have been trying to get us up to see their house since we got to Mooloolaba, however without wheels, it pretty much meant that we had to rely on them to come get us and bring us back. And much of that time, they were tied up with a haul out in their home anchorage of Tin Can Bay as well as working on the house to get it ready for new tenants. It finally worked out for all of us for them to pick us up in Mooloolaba Saturday evening before the Sunday Party on their way home from a Christmas party with Paula's former co-workers.

It was an hour's drive up the Bruce Highway to Eumundi where we turned inland into the hills of the hinterland. It makes for a big change from the long strip of suburbia that hugs the Sunshine Coast north of Brisbane. It is not unlike a subtropical Vermont! Here are rolling hills and eucalyptus forests with winding roads, grazing cattle, and country homes with plenty of land and flowers around them. The evening light was waning fast thanks to dense thunderclouds rolling in, and we turned into their driveway in the nick of time to get our bags up the steps before the thunderstorm let loose. 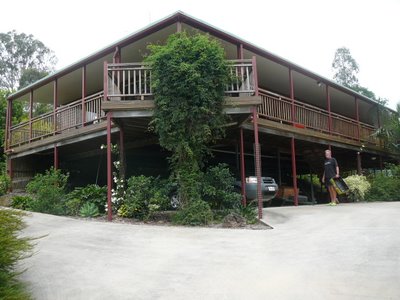 How glorious it is to sip cold beers and dine on a great supper of kangaroo sausage, sweet potato and salad under the eaves of a snug porch while the rain and lightning do their thing.

Because the house was between rentals, there was not much furniture in place. Jim and Paula's big accomplishment of the previous weeks was the bringing in of a container (which required a crane to hoist it over the house!) in which to store all their furniture while the house was rented. They had, however, excavated a guest bed for us, which was a pleasant surprise because we had anticipated a mattress on the floor. We fell asleep to the flashing and booming of the thunderstorm and woke the next morning to tiny wallabies nibbling on grass shoots in the front garden.

Since Paula and Jim are later sleepers, we got up, made ourselves coffee to sip on the front porch. By morning light we were able to get a better look at the house and grounds. 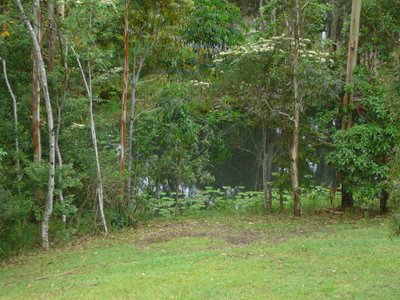 The house is a single level home, projecting on stilts from the steep hillside that slopes down to a pond in a eucalyptus glade, where lotuses float and frogs croak. The hill puts the fairly open canopy of the glade on a level with the porch enabling very easy bird watching. We'd woken to the inane cackle of an Australia kookaburra (although we never saw him) and during coffee a flock of crested white cockatoos set up a ruckus as they passed through.

After coffee we set out for an hour's walk around the country neighborhood. That first morning we saw three more kangaroos, including a big fellow in the middle of the dirt road. We also saw a lot of cows and calves plus a few bulls, most of them with the hump-shoulders of Brahma blood. Neighbors were spread out in a mix of everything from older cottages up to some bigger modern haciendas, and we met several residents out walking as we were, one of them accompanied by a huge dog (Mastiff and Rhodesian Ridgeback mix) named Tyson like Tiffany's Yorkie. Aussie are very quick to be friendly, and these rural dwellers were no different.

The party itself started about 10 am and went on until late with people coming and going. Since Paula and Jim had been away for many months, it was a great reunion with friends who had missed them. There were lots of kids about, and the food, which Jim and Paula had been working on for days, seemed unlimited. 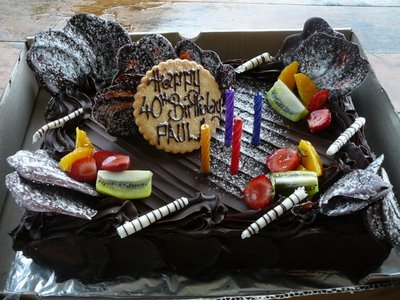 The birthday cake was a huge rectangle of chocolate decadence called a mud cake, and the mounds of empty beer and wine bottles spoke clearly of the Aussie capacity to party. 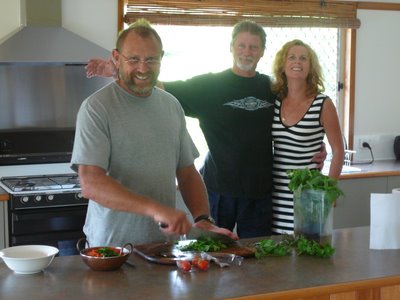 Monday morning, Jim gave us a tour of the 4.5 acre "estate." One thing that fascinated me was that he had cut down the eucalyptus forest uphill from the house (eucalyptus are a big fire hazard) and replaced them with a grove of eliocarpus saplings. 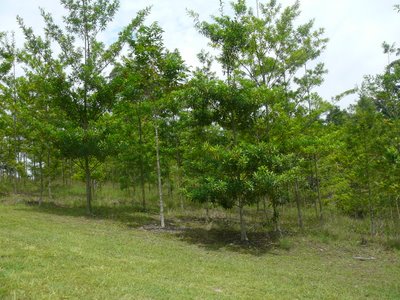 In Australia, the eliocarpus is knows as the Tasman Blueberry tree, and Jim's had doubled in height in just a couple of years. What made this interesting to me was that it is the same species that I planted in the corner of our garden in Crystal River, FL. No one gave me a hint it would grow so tall so fast! Cool!

There is a famous organic farmer's market in nearby Eumundi, and like many of the people living in this part of Australia, Paula and Jim lean heavily toward green living techniques. Jim explained his system of organic vegetable gardening (when they are in full time residence) via which he uses six chickens in a movable, geodesic dome-like coop that he rotates through twelve sections of his garden in two-week intervals. All food scraps and grass clippings are thrown into the coop, and the chickens' natural scratching till the soil while their poop fertilizes things. Evidently in Australia, where conditions tend to be dry, it is highly desirably not to open up the soil to till it like we do in America.

All in all, it seemed like a very agreeable lifestyle (even without furniture), and we could kind of see why Paula's could be having a little trouble mustering enthusiasm for moving back aboard their 40 foot sailboat for another year!